So here's the final update. This encompasses three days of visits to Disneyland Park in Paris. (Well really an evening, a morning, another evening and a full day but who's counting?).

This park while still suffering from the service issues the Studios park does is at least more capable of handling the crowds. It also look amazing as well as having some great versions of the standard Magic Kingdom attractions. This was the first time I had visited the park during their Halloween season. I have to say, I was impressed with the level of effort they ahd put into it. While it's no Not-So-Scary Halloween party, the park really did look great with all the pumpkins and decorations throughout.

I've spoke about this park at length before so i won't say too much. Enjoy the last batch of photos, there's quite a few!

We first arrived at the park in the evening, the castle looked really cool with it's blood red lighting.
image002.jpg (303.14 KiB) Viewed 11835 times

We were hoping to do Captain EO since some of our group had never experienced this. Sadly it was closed despite being listed as open on this day on the park's website.
image005.jpg (302.06 KiB) Viewed 11835 times

DLP really rocked with the "Scary Andrew" meet and greet! We saw the Fireworks show this evening too, but I got better photos the next night so I'll hold onto them for further down...
image006.jpg (347.2 KiB) Viewed 11835 times

Another perk of staying on resort of course is Extra Magic Hours in Disneyland Park!
image016.jpg (315.23 KiB) Viewed 11835 times

There was this weird looking Halloween decoration behind the castle. Not quite sure what it was supposed to be, but hey it looks spooky!
image021.jpg (338.6 KiB) Viewed 11835 times

There are quite a few Disney shorts represented in Fantasyland. The outside of this shop evokes Mickey and the Beanstalk.
image026.jpg (319.29 KiB) Viewed 11835 times

This is pretty much the only Frozen presence in the resort that we encountered. Aside from a couple of toys and dresses in the shops there was very little. Seems like a massive missed opportunity to not have an Anna & Elsa meet and greet which has proven so popular in the other parks,
image028.jpg (366.35 KiB) Viewed 11835 times

After a Day in the Studios we hopped back over to Disneyland to ride this piece of... Well, it was a *little* better than I remember it being but it still is pretty rough for a Disney coaster. Though, certainly not the worst in the park!
image031.jpg (282.47 KiB) Viewed 11835 times

Okay, so Fireworks time. In all my visits to Disney parks around the world I have to say that Dreams is my favourite show. See, I don't always hate on Paris! (Of course it doesn't compare to Fantasmic at DisneySea but what does??)
image032.jpg (254.69 KiB) Viewed 11835 times

The real highlight though, is the castle projections, which are just insane. I haven't seen any of the otehr Disney shows that have started using castle projections in recent years but I really look forward to checking them out.
image035.jpg (264.23 KiB) Viewed 11835 times

The arcades along the sides of Main Street are one of my favourite parts of the design of Disneyland Paris. I don't understand why the newer Magic Kingdoms haven't incorporated these - they're very handy for avoiding the Main Street crowds after the fireworks!
image039.jpg (352.98 KiB) Viewed 11835 times

The next morning we were up very early for another day at Disneyland. AJ enjoyed a very healthy Halloween breakfast.
image040.jpg (362.56 KiB) Viewed 11835 times

Disneyland Hotel is right in front of the park entrance. I'd love to stay here one day just so I could look down Main Street from room/
image041.jpg (350.15 KiB) Viewed 11835 times

Ugh. Space Mountain is still awful. A few people in the group said that they thought it was okay but I completely disagree. I still can't believe that Disney let a ride so brutally rough exist in one of their parks. I really hope that these rumours are true of it being shut next year for a long time for a lengthy rehab. Hopefully some new vest restraints are part of the package!
image045.jpg (304.76 KiB) Viewed 11835 times

You know you basically have the park to yourselves when your group stops to ride these!
image046.jpg (364.06 KiB) Viewed 11835 times

I feel like I'm being too positive about this visit to Disneyland Park Paris so here's a a negative... A lot of parts of the park looked like they were in bad need of a rehab. This fountain area at Dumbo is one such example. It's not something that's ever going to ruin your day but it is quite surprisng to see in a Disney park.
image049.jpg (454.34 KiB) Viewed 11835 times

I love all the blatant drug use that Alice in Wonderland promotes. I lvoe even more that it's still all over Disney parks like this!
image053.jpg (370.14 KiB) Viewed 11835 times

Every morning in the park this float rumble past the crowds with the "This is Halloween" song playing. Not so much a parade but it was cool to see the villains walking around the park.
image059.jpg (485.92 KiB) Viewed 11835 times

Even Frontierland was getting in on the Halloween actions. Look at these four pumpkin men!
image060.jpg (455.24 KiB) Viewed 11835 times

This one is still my favourite of all the Big Thunders!

Before riding Phantom Manor be sure to use the queue as an opportunity to get some good Big Thunder Mountain photos!
image069.jpg (403.92 KiB) Viewed 11835 times

You can also get a good look athe geysers from here. Looking at photos from the park's opening years it's apparent that these have really fallen into disrepair. Hopefully the park's financial rescue package will result in things like this being brought back to their original state.
image071.jpg (407.62 KiB) Viewed 11835 times

Like the Blue Bayou restaurants in the US parks here you dine right next to the boats from Pirates of teh Caribbean!
image081.jpg (316.6 KiB) Viewed 11835 times

It only took us an hour and half to have a three course meal here. A big improvement in service time over Bistrot Chez Remy!
image085.jpg (328.13 KiB) Viewed 11835 times

So there you go... As far as visits to DLP go this one was pretty good. Although I find the real thing that happens to me when I visit DLP is just gives me an even stronger desire to visit one of the better Disney resorts (i.e. All of them). Guess I better do that soon then!

Great report! I was sad that when I got in line for big thunder mountain on my last visit to the park it closed. It was my first ever coaster so it'll always be a bit special.
My last visit was in 2011 and I remember I got a very smooth front seat ride on indiana jones, a non rough ride on space mountain's second car and a pretty rough one on the fourth. glad to see they really are going to work on it.
Reply with quote
AJMouse

Still can't believe it took us 3 hours to get to the end of the maze!

By the way, I was listenin to "On The Boardwalk" by "Rick Benjamin & The Paragon Ragtime Orchestra" while reading this update. And it added so much, hehe.
Last edited by AJMouse on Sat Nov 01, 2014 6:01 am.
Reply with quote
TPDave

Cool photos Divv! My ride on space wasn't as rough as in 2008 when it beat the crap out of me but its still a really bad ride when compared to the uncntrolled crazy airtime of Florida and the staging of California and Tokyo. It's a shame, I just hope they fix it when they do the rehab!!
Reply with quote
Garet

I really enjoyed space mountain but this was way way back when it had just become mission 2 so maybe I was just lucky that it had just come off a huge rehab session.
Reply with quote
TPDave

^ well it was only half its current age back the. As well so it probably all fed into it. I'm just amazed that Disney put their guests through that!
Reply with quote
gardyloo!

Great TR, the pics are really beautiful.
It's nice to see dl paris picking up there games, hopefully the're going to open a new ride (in disneyland park), because that has been a while

So much win in this TR. Thanks Divv!
Reply with quote
hey...hey

Man I miss some Earl of Sandwich...my wife and I love their holiday sandwich. Thankfully they put it on the menu year round.
Reply with quote
BDG 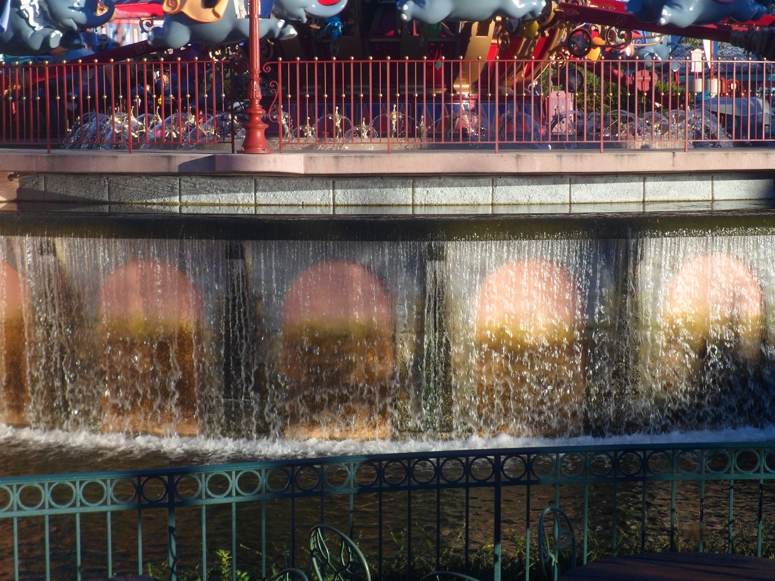 I feel like I'm being too positive about this visit to Disneyland Park Paris so here's a a negative... A lot of parts of the park looked like they were in bad need of a rehab. This fountain area at Dumbo is one such example. It's not something that's ever going to ruin your day but it is quite surprisng to see in a Disney park.

When did you guys visit? Because it was cleaned last week: 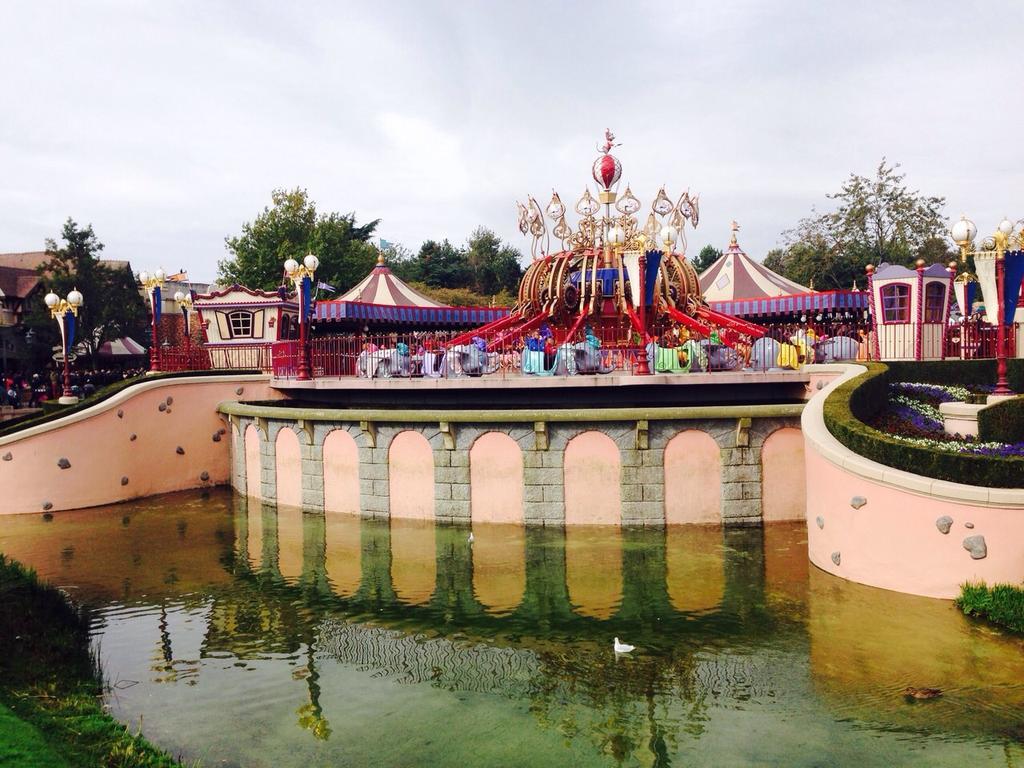