Apparently August is the month where I decide to do some really strange things; last year it was 7 parks in 1 day in Chicagoland, this year its some of the smaller parks in Ohio and Indiana, not in 1 day, but 8 parks over 2 isn't bad either. The idea was the work of Heath, and the driving was done by Kim. The goal; Wyandot Lake, Fun Spot, Indiana Beach, Three Floyd's Brewing, Indianapolis Zoo, Coney Island, Stricker's Grove, Wonderpark, and PKI. Without Kim's awesome driving and ability to stay awake, we'd never gotten anywhere close to accomplishment.

Since the park was sold out of the SF family, we knew we'd at least be able to ride it in the future seasons, but decided since its free, we may as well get there now. Saturday we got there at opening. Not too much to the park, 1 Jr coaster, a few old flatrides, a few kiddie rides, and a few waterslides and activity areas.

Arriving at the Columbus Airport, they show their sense of humor and their love for Ohio State
Hodownday1001.jpg (63.31 KiB) Viewed 12942 times

The parade of a pelican, some SF employees with flutes, and a random pirate parrot officially opens the park
Hodownday1009.jpg (105.09 KiB) Viewed 12942 times

Others showed up and enjoy their ride on this classic junior woodie
Hodownday1031.jpg (93.85 KiB) Viewed 12942 times

Other ancient rides at the park include this grandfather to the Wisdom Tornado
Hodownday1021.jpg (141.18 KiB) Viewed 12942 times

After a 3 hour drive, we arrived in Angola, Indiana, home of Fun Spot. The park should be called Fun Speck, or Not Much Fun Spot because there really wasn't too much to do there. The park had really weird hours, closing at 6pm every night, and not being opened every day in the summer. At least I don't have to go back here until they add a woodie (which probably won't be for a REALLY long time!)

There are paths, but they're smaller than Animal Kingdom's, so just walk thru the grass like everyone else
Hodownday1043.jpg (75.8 KiB) Viewed 12926 times

And this time its actually traversing the loop instead of being stuck in it!
Hodownday1050.jpg (92.29 KiB) Viewed 12926 times

We were denied the kiddie coaster credit, but its ok because we weren't expecting to get it (Heath wanted me to flirt with the op, but I said "nay nay!")
Hodownday1051.jpg (97.05 KiB) Viewed 12926 times

All the coasters are right next to each other, handy for credit whoring
Hodownday1062.jpg (86.41 KiB) Viewed 12926 times

Heath was all excited about the hoodie, until I pointed out it had mountains on it, and there ain't no mountains anywhere around the place!
Hodownday1065.jpg (80.24 KiB) Viewed 12926 times

Looks like you had alot of fun getting some credits!

None of us needed any credits at Indiana Beach, but we love the park so much that we figured "we're like 2 hours away, lets go!" Though we could spend at least a full day at the place, we only had a few hours, but it was probably the most time we spent at any park the entire weekend.

I took us to the South entrance since Kim and Heath had never been over the suspension bridge
Hodownday1076.jpg (103 KiB) Viewed 12908 times

The park was booming on a Saturday night, and Hoosier Hurricane was rocking with 2 trains
Hodownday1082.jpg (90.49 KiB) Viewed 12908 times

Almost every ride is somehow over the water, which makes for some really neat visuals
Hodownday1084.jpg (109.65 KiB) Viewed 12908 times

The newest ride, Splash Battle, was more fun for the onlookers than it was for the riders
Hodownday1087.jpg (111.9 KiB) Viewed 12908 times

Somewhere in that mess is a Galaxi. This park took lessons from Blackpool Pleasure Beach on how to cram a lot into a little
Hodownday1091.jpg (102.58 KiB) Viewed 12908 times

Frankenstein's Castle should not be missed. Its well worth the extra money
Hodownday1137.jpg (92.02 KiB) Viewed 12908 times

Too intense credit whoring for me, though. I'm a 1-or-2-park-a-day kind of girl. But I would like to go to Indiana Beach some day.
Reply with quote
CoasterFanatic

Great TR so far. Looks like my cheap ass will have to wait about 30 years or so to go to Fun Spot. No sense paying now, when Grandparents get in for free on Thursdays!

2 Sets of flyers in one day. You suck!
Reply with quote
dandaman

2. They have that same t-shirt at CP.

I definitely have to include the place in my next US visit (if it will ever happen).
Reply with quote
bgwfreak

IB looks awesome. I hate I haven't gotten up there yet.

I should have gone there instead of SFStl. lol 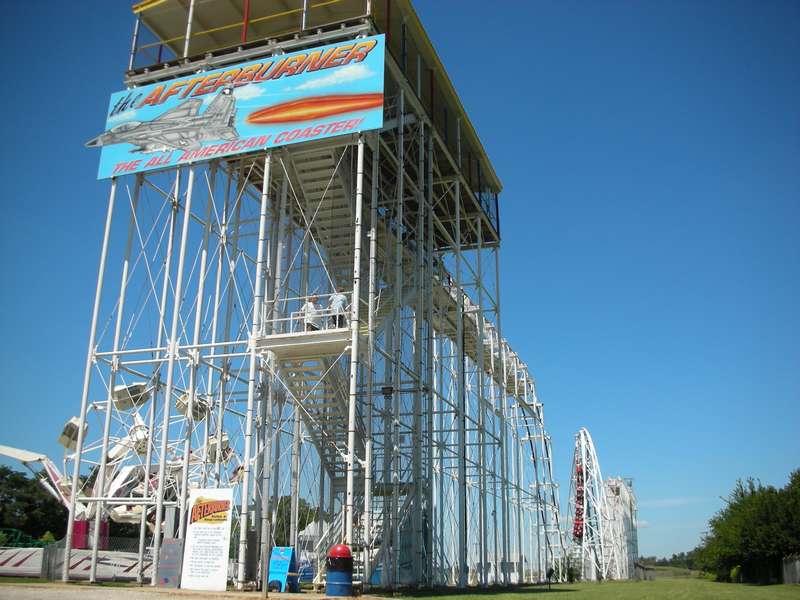 ^ I'm so jealous. I have yet to ride one of these.

I know it's an Arrow, but I still want to try one out before they are all gone.
Post a reply
>>
Switch to full style