Wow! This will be awesome when I go this summer.
Reply with quote
jamesdillaman

Could be cool. Although i like water rides where you can choose to get soaked by sitting in a certain spot, or not "soaked-to-the-bone". Especially rides that require you to wear shoes on them. Nothings worse than having wet socks in your shoes and getting wrinkly feet that hurt the rest of the day. Cedar Point even sells dry socks at the end of their Rapids ride, at least they did the last time I rode it.

This sounds pretty sweet, seeing as Socal is supposed to get slammed by a huge heat wave this summer. Hopefully I'll actually get out to this park this year!
---Brent

USH opened the Simpson's Ride this afternoon for a "technical rehersal"from about 2:30pm-5:30pm. Construction was still going on in the surrounding area(concession stand) and parts of the que. Some flatscreen TVs had not been installed yet and touch notes on masking tape were all around the ride. Only the left dome was open and was running about 3/4 capacity. The line was about 20 minutes and the ride was very smooth, fun, and lots of the great Simpson's humor. They really did a first class job converting the ride from BTTF. The Krustyland employees were friendly and efficient. The local Fox station is giving away tickets to be the "first to ride" this Friday before park opening.
Reply with quote
Jew

They were running 11/12 cars. The rest of the week they are media events, so don't be 100% sure it will be open. The official opening day is now May 19th.
Reply with quote
robbalvey 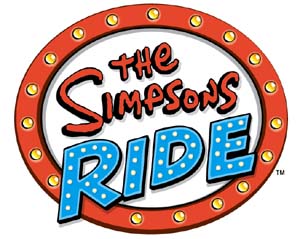 This morning I got the opportunity to head down to Universal Studios Hollywood to check out the new Simpsons Ride.

The Good!
Overall Ride Package - As an overall ride package The Simpsons Ride really delivers a great experience! The themed area is great, the building looks fantastic, and the queue, pre-shows, and safety videos steal the show! The ride itself is "fun" but also your standard simulator fare. (I'll get to that part in a moment)

Family Friendly - This ride will absolutely be a hit with families and other park goers. It's only carries a 40" height restriction so young kids will be able to ride.

Attention to Simpsons Detail - If you're a Simpsons fan, you're going to love that you are surrounded by nearly two decades of Simpsons memories. It's all there - the main characters are represented, and plenty of secondaries like Mole Man, Willie, Barney, and even lots of memorable moments like Radioactive Man, The Tooth Chipper, etc. And if you like Itchy & Scratchy, the "safety video" may be the best part of the entire ride!

The Not-As-Good
The Simulator - While the simulator ride is "fun" it really is obvious that this is re-dressed technology from 17 years ago. (Yes, Back to the Future was that old!) It doesn't even feel as though they have updated the ride much. When you are on the "boat ride" if feels just like the old "lava ride" from Back to the Future. You still crash through just as many signs and when you fly through Springfield, it's just like flying through Hill Valley. There is even the clock tower courtyard still present in The Simpsons.

There are parts of the ride that are fun, like the roller coaster, the corkscrew, and the "drop ride." But I was really hoping for a "memorable moment" that takes an old ride and gives it something fresh. (See "The Chicken Dance" sequence in the Jimmy Neutron simulator at Universal Orlando.)

3D Simpsons - I have to say that the "3D Animated Look" of the Simpsons just didn't really work for me. Especially after walking through some of the most incredible displays of the Simpsons franchise from over the years, you are presented with this awkward looking version of something so familiar. It makes you think "What IS that?"

I think had either the simulator been more updated OR the animation had been done in 2D I could be more forgiving of the actual ride part of this attraction.

Overall, it's a fun experience. I think most people who come to the park will walk away LOVING the ride. I still think that a franchise with so much history and years worth of material to pull from deserves more than a re-dress of an old attraction (heck you could build an entire Simpsons PARK) and maybe this will be just the start of many more Simpsons rides to come. I sure hope so!

Any ride where you enter through an insane clown's mouth instantly gets thumbs up!
simpsonshollywood05.jpg (78.81 KiB) Viewed 26751 times

The pre-show areas were amazing looking. You are surround by years worth of Simpsons memories.
simpsonshollywood19.jpg (87.3 KiB) Viewed 26751 times

All around the room is "midway booths" staffed by some of your favorite Simpsons characters.
simpsonshollywood10.jpg (70.62 KiB) Viewed 26751 times

On the overhead monitors you get to see ads for other "Krustyland" rides and attractions.
simpsonshollywood16.jpg (71.66 KiB) Viewed 26751 times

Someone seriously needs to MAKE all these rides into a Simpsons park!
simpsonshollywood13.jpg (64.9 KiB) Viewed 26751 times

The pre-show starts! The Simpsons are there to check out Krusty's newest ride!
simpsonshollywood21.jpg (63.27 KiB) Viewed 26751 times

Here we are! On the ride ready to follow the Simpsons...to their DOOM?!?!
(Photo by Universal Studios)
simpsonshollywood39.jpg (55.75 KiB) Viewed 26751 times

As you can see, they've done a very good job of re-dressing the vehicles, but they still feel VERY "Delorian-ish"
simpsonshollywood40.jpg (80.61 KiB) Viewed 26751 times

Photo from the ride itself - you can see the 3D version of Homer! (The Yellow one, not the TPR Member!)
(Photo by Universal Studios)
simpsonshollywood43.jpg (96.93 KiB) Viewed 26751 times

Another look at the ride vehicle. This should make Ryan cry! :D
simpsonshollywood44.jpg (74.66 KiB) Viewed 26751 times

So overall, the ride is fun. As a complete "ride package" The Simpsons really delivers.
simpsonshollywood56.jpg (79.68 KiB) Viewed 26751 times

The area and the building looked really good! I was surprised how well they pulled off the re-dress.
simpsonshollywood58.jpg (86.71 KiB) Viewed 26751 times

Although I thought it was funny that Doc Brown's Chicken is next to the Kwik-E-Mart!
simpsonshollywood59.jpg (83.4 KiB) Viewed 26751 times

The big-head Simpsons were going to take a ride.
simpsonshollywood64.jpg (70.1 KiB) Viewed 26751 times

Thanks for the report, Robb. I need to figure out what type of jobs you, and folks like Big Mike, have that allow for all of these spur of the moment AND big trips.

Besides the chicken joint, any trace of Back To The Future around (in or out of the building)?

Robb's in SoCal, so going to USH isn't that big of a trip.

I think we all wish we could jet set around and visit these parks though.

^I dunno--sometimes getting across LA can take as long as flying to Florida.

I still watch the Simpsons every Sunday night, so I'm looking forward to checking this attraction out.
Reply with quote
robbalvey

I just updated this with a couple of screen shots from the ride that Universal provided.

You can sort of see the "XBOX Looking" characters that are in the movie.